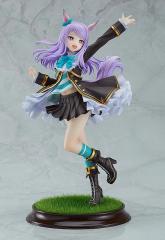 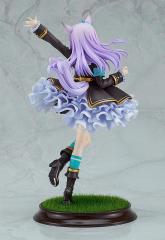 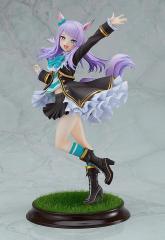 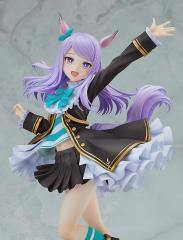 "Thank you for your congratulatory applause."

From the game "Umamusume: Pretty Derby" comes a 1/7 scale figure of Mejiro McQueen! Mejiro McQueen has been captured in figure form wearing her Elegance Line racing uniform, responding to the cheers of the crowd with a smile after winning a race. Her lustrous hair fluttering in the wind and elegant racing uniform have been faithfully captured in figure form with precise and delicate gradated paintwork. Her refined physique, true to her reputation as the Strongest Stayer, is sculpted in stunning detail, making for a figure that is a joy to look at from a variety of angles. The base of the figure is made with artificial turf that serves to enhance the figure's realistic atmosphere, making it appear as if it were a moment captured in time. Be sure to add Mejiro McQueen, the Umamusume who runs with the pride of the prestigious Mejiro family in her heart, to your collection!