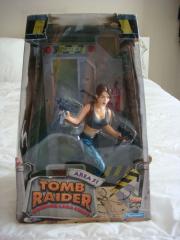 International action hero Lara Croft has conquered the darkest jungles and topped the highest mountains - all for the thrill of the challenge. She starts everyday someplace new. Each exotic location more deadly than the last. Lara fights her way past beast and man in search of the world's greatest treasures. The odds are always against her - just the way she likes it.

Centuries ago, a meteor containing four alien artifacts was discovered and looted. Each mysterious artifact has the power to alter the genetic make-up of all living organisms. Unaware of their true power, Lara Croft is on the hunt for these missing artifacts. Her quest takes her to Area 51, the government installation that doesn't officially exist. As she navigates the most treacherous high-tech complex ever constructed, she stumbles upon missile silos, UFOs, alien autopsy rooms and heavily-armed military police. Few who enter Area 51 live to tell the tale, but Lara has survived serious perils before....