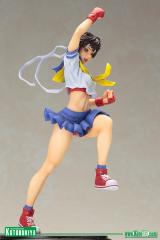 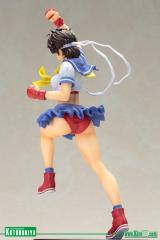 - Sakura is dressed in her usual schoolgirl uniform with a new design based on an illustration by famed Japanese illustrator Shunya Yamashita.
- Sakura is caught mid-technique in a powerful yet beautiful pose in this 24 cm (9.5 inch) 1/7 scale statue.
- Sakura's clothing and headband flow with her technique, giving the illusion of movement.
- Display alone or alongside other STREET FIGHTER themed Bishoujo Statues from Kotobukiya.

Kotobukiya's series of Bishoujo statues based on the characters from STREET FIGHTER continues with SAKURA!