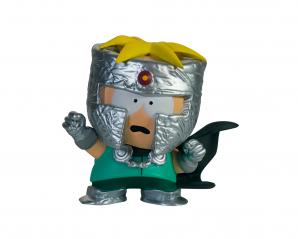 Ubicollectibles presents its latest creation with the meanest super villain South Park has ever seen: Professor Chaos, the super villain alter-ego of Butters.

Professor Chaos is Butters Stotch's super villain alter-ego. Tired of his life of dejection, he has vowed to bring chaos to the world that has rejected him over and over again.

He is aided by his trusty partner in crime, General Disarray, and sometimes secretly works with the Coon. In his own imagination, he has innate super powers, such as levitating, flying, shooting lightning bolts, causing earthquakes, throwing web, and using his cape as an impenetrable shield.

Chaos has appeared many times, concocting not-so-evil plans to destroy the world... most of which, the Simpsons have already done. Where he goes, destruction will follow!