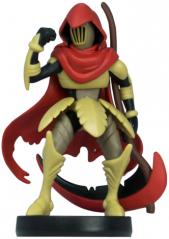 In life, Specter Knight was a cruel and cunning warrior. And although his blood is now icy cold, he is no less formidable as a phantasm. The most begrudgingly loyal knight of the Order, Specter Knight follows the Enchantress only because she is capable of magically extending his undeath. Clutching a grim Scythe in his shriveled claws, Specter Knight commands his weapon with uncommon cunning... and his next target is Shovel Knight.