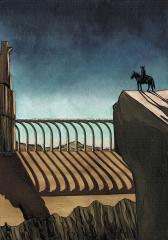 Game / IP: Shadow of the Colossus

ICO and Shadow of the Colossus are some of the first video games labeled 'art' by both the public, media and critics. In interviews Fumito Ueda has spoken regularly about his artistic intentions with his games and his sources of inspiration from the visual arts. For instance, the painting and prints NICO and ICO reference the artworks by the Italian surrealist painter Giorgio de Chirico (1888 - 1978). According to Ueda the surrealistic world of Chirico's artworks matches the allegorical world of his video games.

The prints ICO and NICO are connected in a way. NICO is a portmanteau of 'Next ICO'. The N in Japanese stands for the number 2 which makes NICO (later renamed to Shadow of the Colossus) a sort of spiritual follow-up to ICO. Both games share the same dreamlike aesthetic, desaturated color palette and Bloom lighting. There are also a lot of thematic similarities between the two titles. For example, Shadow of the Colossus' story-line focuses on a young man named Wander who enters a forbidden land with his horse Agro. Wander must travel across a vast expanse on horseback and defeat sixteen massive beings, known simply as colossi, in order to restore the life of a girl named Mono. The horns on the head of the main character in the artwork NICO (which would later be changed) sort of foreshadows the ending of Shadow of the Colossus that sees a baby born with horns. ICO starts its story with a horned boy.

Shadow of the Colossus has therefore also been called a prequel to ICO even though Fumito Ueda himself remains vague about this. Ueda's The Last Guardian, the eagerly awaited PlayStation game released late in 2016, completes the trilogy of sorts. This video game has long carried the working title TRICO and TRICO is also the name of the main creature in this game.

All three games share the same visual style but also other returning elements from Ueda's work such as the theme of companionship or friendship. Shadow of the Colossus explores the bond between Wanderer and Agro. ICO is partly about the relationship between Yorda and ICO and in The Last Guardian about the boy and the furred creature. All three games share the minimalist style of storytelling that is part of every Ueda game, who has been inspired in that regard by the work of the French game developer Eric Chahi, the creator of the seminal video game Another World that was released in the nineteen nineties. Both ICO and Shadow of the Colossus have been very influential video games. Not only for other video game designers but many artists from various disciplines.