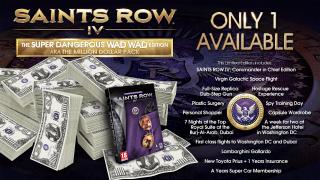 "The only thing we have to fear is fear itself. And aliens. Aliens are also a problem."

Saints Row IV is the epic conclusion to the open world game that changed all the rules. The head of the Third Street Saints is now the leader of the free world-but it's not all drone strikes and drunken interns. Earth has been invaded by galactic overlord Zinyak and it's up to you, the Boss, to free your fellow Americans (and everybody else) from the virtual hell in which they've been imprisoned.

Use the aliens' own arsenal against them. Suck your enemies into the void with the blackhole gun. Drive the Zin crazy with the power of dubstep. Stomp through the city in a bad-ass mech. You can also bend the rules of simulated Steelport to leap tall buildings, outrun sports cars, set aliens ablaze and fling them across the city with your mind. With new and old homies by your side, you will crush the alien threat and save the world the only way the Saints know how: massive wanton destruction.