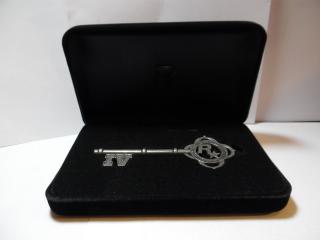 These keys were given away as part of a promotional contest to the most dedicated players. Completing the game 100% earned players membership into Rockstar's 100% Club. If eligible, players would receive a physical Key to Liberty City. The contest was originally set for one week, but extended to end on May 19th. Keys were shipped out in November.

Be among the first to join Grand Theft Auto IV's 100% Club, a members-only distinguishment for Liberty City's most elite players. The one-week challenge begins with Grand Theft Auto IV's official release on April 29th. Eligible Rockstar Games Social Club members who complete 100% of the game will have their achievement commemorated by being awarded a coveted "key to the city".