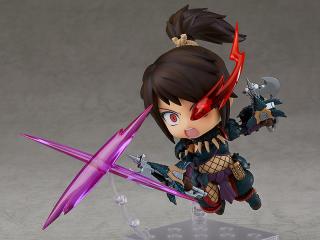 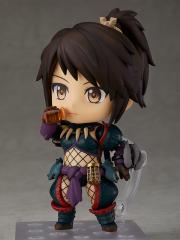 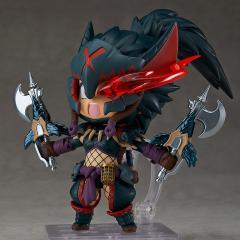 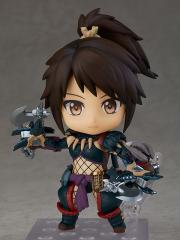 One who hunts under the cover of twilight, moving like the wind.

From the PlayStation 4/PC (Steam) game "MONSTER HUNTER WORLD: ICEBORNE" comes a fully articulated Nendoroid of a female hunter in Nargacuga Alpha Armor. This special DX version includes all the parts that are included with the standard version together with bonus parts for even more display options!

She comes with two face plates including a reticent standard expression and a crazed expression. The Hidden Saber is included along with two carving knives and a throwing knives effect part.

Additionally, the DX version comes with an interchangeable head part for displaying the hunter with a ponytail haircut, the Hidden Tomahawk I Dual Blades, a critical hit effect part, a Demondrug consumable and an original eye glint effect part made for the Nendoroid, allowing you to enjoy the world of "MONSTER HUNTER WORLD: ICEBORNE" even more!