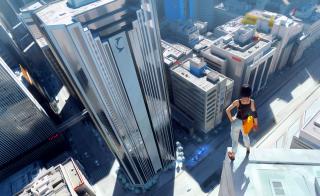 Product: Above It All (Art Print)

The artwork Above it All is digitally created concept art for the video game Mirror's Edge by studio DICE. The artwork shows protagonist Faith looking down on a city. This original digital fine art print is hand-numbered and signed by Mirror's Edge Art Director Johannes SÃ¶derqvist.

Mirror's Edge is a game that is instantly recognizable from any screenshot. You see a clean-swept dystopia with skyscrapers plastered in bright white, interspersed with patches of strong primary colors under an eternally fresh blue sky. On images taken from a first-person perspective you convincingly see hands, legs and feet moving. Mirror's Edge is not only a landmark title in the modern games industry because of its unique art direction. It was also the first game to convincingly give players an acute physical sense of their virtual body within the environment.

With Mirror's Edge the Scandinavian studio DICE wanted to make a mature game that didn't revolve around shooting. In the game you play as Faith, a courier and free runner that undertakes illegal missions for an underground organization. The point of free running is to move as fast and fluently through an urban environment as possible. To try and simulate a move set as intricate as that of free runners had never been attempted before in first-person games. Before Mirror's Edge the first-person perspective had been mostly used in shooting games. In these games the player was never more than a floating gun in the middle of the screen. The game worlds themselves were also mostly flat and horizontal. Think of games like Doom.

It proved a big challenge for DICE to convincingly communicate the sense of running and fast motion without people getting motion sick. After much experimentation the solution finally proved to animate ones perceptions of movement and to not try and replicate the exact body movements.

The ability to move freely in Mirror's Edge is juxtaposed thematically with a police state wherein personal freedom is restricted. The city in Mirror's Edge is visually based for a large part on Tokyo with at its center a large triangular glass skyscraper called The Shard (In a wonderful case of life imitating art, London - the city with arguably the most CCTV camera's in the world - now has almost an exact same building called The Shard at its center).

The buildings that are plastered in white have their origin in the early untextured render models that are used at the start of a game development project. The brilliant bright lighting was a result of director Johannes SÃ¶derqvist's inspiration from the plaster of a Spanish village. He saw how the light and colors bounced of it and decided to recreate that effect in the game. Special lighting had to be developed for this. Another technical challenge in the production of Mirror's Edge.

The unique art direction and lighting are meant to support the concept of maintaining flow while moving. The bright colors and shading give the player important visual feedback on where to go. They allow the player to intuitively traverse the city at high speeds fluently. The player in Mirror's Edge is not being distracted by icons, arrows and health bars. While running you feel you know where to go because of the smart color coding and lighting. Each location also has a distinct color mixture that helps to give the player a feeling of progression through the city. Green for instance is only used indoors.

How well the art direction, technology and gameplay synergy works mix in Mirror's Edge is probably best illustrated by the downloadable levels that were released later. These levels are completely abstract. Consisting of only blocks, ramps and color. But despite the game presenting arguably one of the most complex 3D environments in firstperson games, it is perfectly possible for a player to traverse the environment intuitively and at high speed.