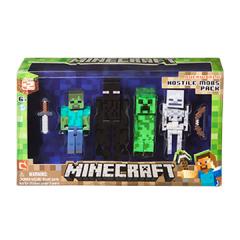 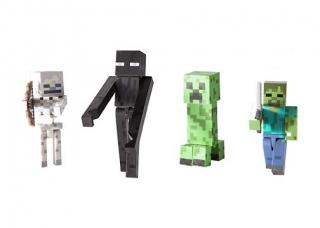 Skeleton
Type: Hostile Mobs
Behavior: Once Skeletons are within 8 blocks without obstacles in their sightline, they will begin shooting arrows at the player. They will continue their chase of the player, until the player moves beyond 16 blocks from the deadly Skeleton.
Fact: Like Zombies, Skeletons will burn in sunlight.

Enderman
Type: Neutral / Hostile Mobs
Behavior: Endermen become hostile when provoked. If damaged by environmental sources, they become neutral and teleport away.
Fact: Endermen are one of two mobs that can spawn in the End.

Creeper
Type: Hostile Mobs
Behavior: Creepers stealthily approach players and explode at the most inconvenient of times. They're vulnerable to cats and ocelots and make an ominous hissing noise when they're about to pop!
Fact: The game's creator accidentally invented the iconic Creeper when designing a pig.

Zombie
Type: Hostile Mobs
Behavior: Zombies are common mobs that pursue the player on sight and continue chasing, even after being attacked. They can catch fire in sunlight and make moaning and groaning sounds.
Fact: When killed, Zombies drop up to 2 pieces of rotten flesh. This flesh can be used to heal and breed tamed wolves.