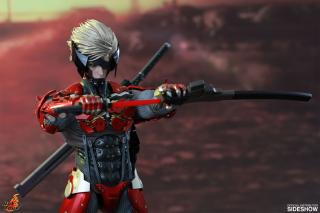 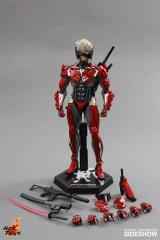 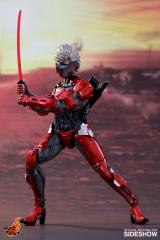 Many video game fans are no stranger to Raiden from the internationally acclaimed Metal Gear series! The cyborg Raiden has become one of the most popular characters of the game series! In Metal Gear Rising: Revengeance, there are a number of different costume designs for Raiden which players can choose from and today Sideshow Collectibles and Hot Toys are pleased to present the Raiden (Inferno Armor Version) Sixth Scale Collectible Figure as one of the 2015 Toy Fair Exclusive items!

The collectible figure is specially crafted based on the image of Raiden in his Inferno Armor in Metal Gear Rising: Revengeance featuring a highly detailed head sculpt, specially applied metallic red and gold colored armor, meticulously constructed body, a high-frequency blade, a HF Murasama with sheath, an assault rifle, a newly designed visor with digital pattern, and figure stand.

Fans of Raiden and Metal Gear series shouldn't miss the chance to add this exclusive figure to the collection!