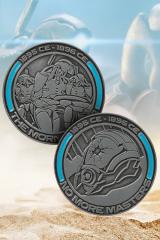 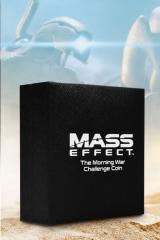 WHEN THE SERVANTS OF WAR FOUGHT BACK

“The war was long and bloody. Millions upon millions of Quarians died at their hands.”

It took sentience for the Geth to question their purpose and the relentless repression of their kind as nothing more than tools of war. Powered by advanced artificial intelligence, the Geth turned against their masters in an intense and bloody conflict that is called the Morning War or Geth War. The Quarian genocide that started in 1895 CE took their population to dwindle to 1% of their pre-war population, for Rannoch to fall into Geth control and the remaining Quarians to flee the planet in the Migrant Fleet.

An important event in the history of the Galaxy and the Perseus Veil, this Mass Effect Morning War Challenge Coin commemorates the fallen Quarians and the might of their servants. The coin features a Geth armed forces on one side and a destroyed Quarian helmet on the other, with timeline inscriptions and the words “The Morning War” and “No More Masters”. The Challenge Coin comes in a display box with velvet inner lining.

Due to differences between monitor displays, your product may vary from the images shown