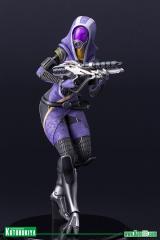 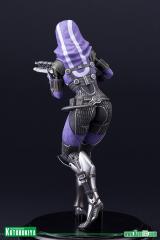 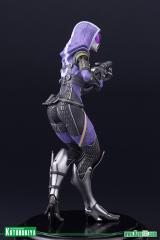 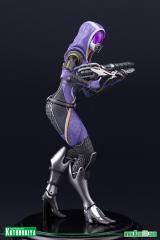 Mass Effect took the video game world by storm in 2007, giving players the chance to explore the galaxy as Commander Shepherd. The BioWare hit featured great sci-fi characters and action, spawning two massively popular sequels. Kotobukiya continues its line of Bishoujo statues from the Mass Effect series (after the alluring Liara Tâ€™soni and the female version of Commander Shepard) with the hauntingly beautiful TALIâ€™ZORAH! Youâ€™ve never seen the Quarian Machinist look quite like this, based on a fantastic new character interpretation by master illustrator Shunya Yamashita.

A member of Shepardâ€™s team hunting down geth while on her Pilgrimage, Taliâ€™Zorah nar Rayya uses her knowledge of and proficiency with machines as well as her skills with pistols and shotguns. She joins the Bishoujo lineup wearing her iconic Quarian garb with a purple, black, and yellow bodysuit complete with intricate layers and different textures, a skirt, belts, a hood, and complex boots fitted to her uniquely-shaped legs and feet. The color palette is really striking with the bright yellow accents, and the alienâ€™s face is covered by a semi-opaque pink faceshield and respirator. Tali is captured sinuously walking forward, leaning over gracefully as she wields her Quarian Reegar Carbine.

Taliâ€™Zorah stands just over 9 inches tall (1/7 scale) on a special display base. Add her to your Mass Effect collection and display her next to the previously released Liara Tâ€™soni and Commander Shepard Bishoujo statues!

- Based on a new character interpretation by Shunya Yamashita.
- Tali carries her Quarian Reegar Carbine at the ready.
- Tali wears her purple body armor and mask, a look inspired by the game.
- Display alongside other Mass Effect Bishoujo statues like Commander Shepard!