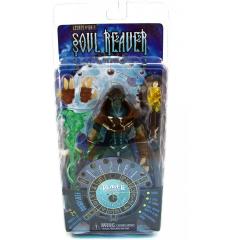 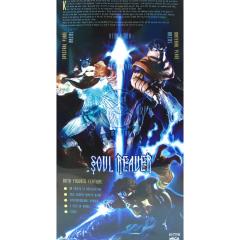 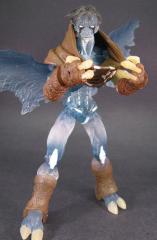 This is the Player Select Spectral Plane version of Raziel with a translucent body and green Soul Reaver blade.

Kain is deified. The clans tell tales of him. He was mortal once, as were we all. However, his contempt of humanity drove him to create me, and my brethren. I am Raziel, firstborn of his lieutenants. I stood with Kain and my brethren at the dawn of the empire. I have served him a millennium. Over time, we became less human and more...divine. Kain would enter the state of change and emerge with a new gift. Some years after the master, our evolution would follow, until I had the honor of surpassing my lord. For my transgression, I earned a new kind of reward...Agony. There was only one possible outcome: my eternal damnation. I, Raziel, was to suffer the fate of traitors and weaklings, and burn forever in the bowels of the lake of the dead. I was plunged into the depths of the abyss. Unspeakable pain, relentless agony. Time ceased to exist. Only this torture, and a deepening hatred of the hypocrisy that had damned me to this hell. An eternity passed, and my torment receded. Returning from the precipice of madness, the descent had destroyed me, and yet, I lived. Reborn as the Soul Reaver... Angel of death in the eternal Wheel of Fate, the purifying cycle which sustains all life and the only soul with a free will. Uncovering ancient mysteries of the land of Nosgoth, on a path of revenge, I am seeking the truth of my destiny...