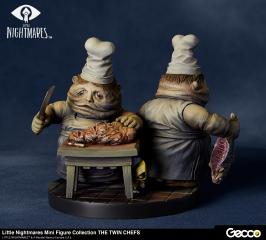 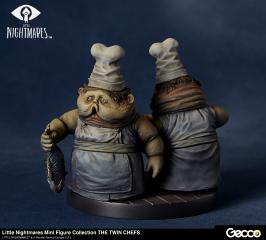 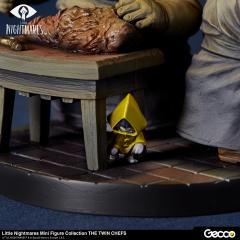 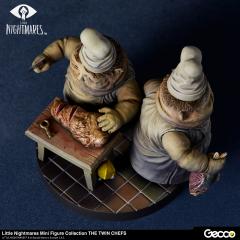 "Little Nightmares" is a horror adventure game starring “Six” a little girl who’s trying to escape the massive vessel Maw, using her courage and wisdom. The heroine Six, and the strange and horrible residents by her side are recreated as palm-sized mini figures. Symbolic props for each character adorn the detailed diorama bases, capturing the wonderful and eerie atmosphere of the game. In this series, Six, Nome, The Janitor, The Twin Chefs, The Guests and The Lady are lined up.

The Twin Chefs are responsible for the food on the vessel Maw, the main stage of Little Nightmares, are now available as a palm-sized figure. The grotesquely sculpted flabby flesh and skin captures the haunting creepiness of the characters. The chefs' items, such as knives and ingredients, are finely captured recreating the kitchen in the game. The composition of the brutal chefs, who do not allow anyone to sneak into the kitchen, create a suspenseful atmosphere with Six hiding underneath the cooking table!