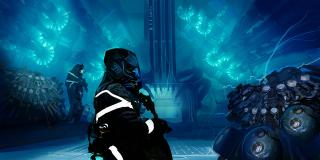 Killzone is about war. Aesthetically the games are science-fiction interpretations of WWII. Although the series has gradually become more exotic with locations featuring green skies and blue-hued jungles. As can been seen in concept artworks such as Jungle & The Massar Constant. Yet Killzone has always tried to depict a more raw and realistic version of science fiction warfare than other big game series. Concept art such as Derelict and Phyrrus Nuked Visari have that somber palet and almost depressed melancholic atmosphere associated with WWII and WWI. The uniforms and enemies are also based on those of the German, Russian and Allied forces of that era.
The concept art also calls to mind more recent conflicts. Collateral could almost be 9/11 news footage and battles are fought out over oil rigs in frozen arctic environments. An internal studio illustration such as Last of the Heroes evokes the archetypical image of the forgotten Vietnam war veteran.

Game development is a wonderful cocktail of IT, Art and Design. It is a typical production for the post-autonomous era in which we live, where art and entertainment can still be conceptualized by a single person or a handful of people but the actual production is done by a huge team of specialists and craftsmen. Sometimes over many years. The fact that Killzone has so consistently been developed and grown over some many years and in the hands of so many people underwrites Guerrilla Gamesâ€™ position as one of the leading game developers in Europe.