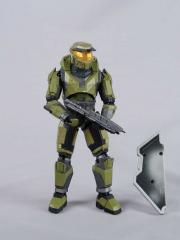 This all-new figure portrays the hero of the Halo trilogy just as he appeared in the game that started it all: 2001's Halo: Combat Evolved. The stylized, angular design is sure to remind long-time fans of how he appeared when he was first introduced ten years ago. Figure comes with Assault Rifle, Frag Grenade, and the left half of the "Easy" Difficulty Plaque.