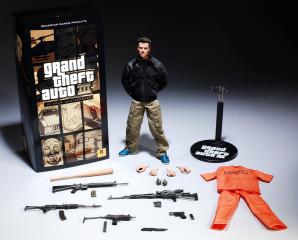 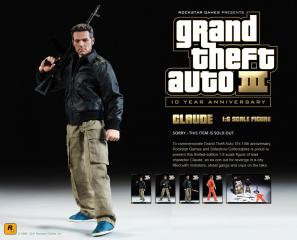 To commemorate the game's 10th anniversary, we're proud to announce that Grand Theft Auto III will be coming to select new generation iOS and Android devices later this fall. We're also pleased to announce that a limited-edition action figure of lead character Claude, created by renowned collectible manufacturer Sideshow, will be available for pre-order in limited quantities at the Rockstar Warehouse.

This fully articulated 1:6 scale action figure of Claude comes dressed in his original attire of cargo pants and a bomber jacket, but can also sport his iconic Liberty City Prison-issued jumpsuit (supplied) and comes equipped with an arsenal of classic weapons from Grand Theft Auto III including a bat, knife, grenades, pistol, sniper rifle, and assault rifle.

This rare and valuable collector's item MSRPs for $149.99, but Social Club members have the exclusive opportunity to nick one for free.