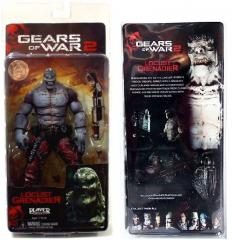 Grenadiers act as the Locust Horde 's shock troops. Armed with a Gnasher Shotgun and fragmentation grenades. Grenadiers prefer to attack from close range and decimate enemy ranks with their opening salvo.

The figure comes with a Gnasher Shotgun and a Frag Grenade. Both can be used by the figure and are inter-changeable with other figures.