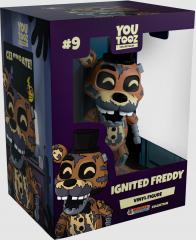 Ignited Freddy makes his way into Youtooz in a searing blaze! Standing at 4.6 inches tall and leaning forward staunchly, his bright yellow eyes shine ominously from dark sockets as a big open mouth prepares to chomp down on an unsuspecting foe. His thick two tone brown fur has been burned away in large chunks to reveal his cold metal endoskeleton, while his left ear and hands are long gone revealing only blunt nubs. He wears a deep black top hat and bowtie that are perfectly intact, magically untouched by any fire. The exterior of his packaging shows Freddy peering at you through a window backed by a stormy sky. While the interior replicates the inside of a dimly lit bedroom with shadow hands reaching in from the outskirts. The protective sleeve shows a silhouetted Freddy standing ominously in the bedroom’s doorway. This collectible ships in a matte, embossed, protective outer sleeve and a custom sized plastic protector for maximum protection during shipping.

Ignited Freddy is one of the main antagonists from ‘The Joy of Creation’ fan game series in which you play as Scott Cawthon and was based off of Five Nights at Freddy’s 4.