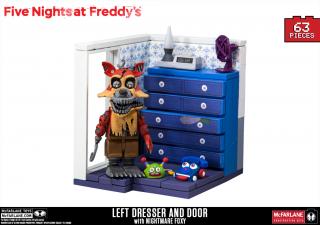 One of the more popular settings in the FNAF universe is the bedroom in FNAF 4, and one of the most recognizable images is the dresser and door on the room's left side. With a lava lamp and fan standing atop of the dresser overseeing the room, players must be aware of any subtle changes that signal an animatronic could be closing in.