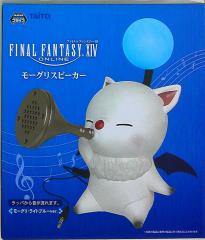 Adventure awaits in Square-Enix's new online role-playing game Final Fantasy XIV. Moogles (also known as "Moguri," a combination of the Japanese words for mole and bat) are commonly appearing creatures that appear throughout many of the Square-Enix worlds and games, including the Final Fantasy series, Chocobo and the Kingdom Hearts series.