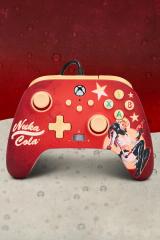 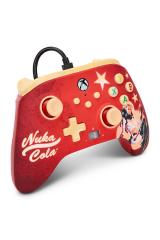 Zap your thirst for a superior gaming experience!

ZAP YOUR THIRST FOR A SUPERIOR GAMING EXPERIENCE

Get an edge over the competition with two mappable Advanced Gaming Buttons that you can program at any time–even in the middle of the game.

Stay comfortable during intense battles and long gaming sessions. The ergonomic design, intuitive-feel button layout and silky smooth anti-friction rings around each thumbstick let you game in comfort for longer than ever.

Immerse yourself. Your favorite games come to life when you plug your favorite headset into the 3.5mm stereo headset jack and feel the hyper-realistic dual rumble motors with each hand. Whether it's a pounding, pulsating beat or a subtle quiver, you'll feel as if you've stepped into an entirely new world every time you play.

Share your glory. No controller is complete without an intuitive and easy-to-reach Share Button, Headset Dial, and quick-access Mic Mute. The Enhanced Wired Controller for Xbox Series X|S delivers on all fronts.

Wired, But Not Tethered. A high-quality, detachable 10-foot cable gives you the freedom to play from your favorite spot in the room, then wrap it up with an attached hook-and-loop strap until the next time you play.