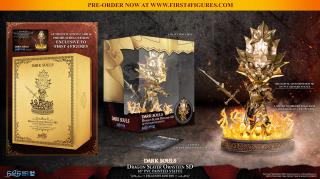 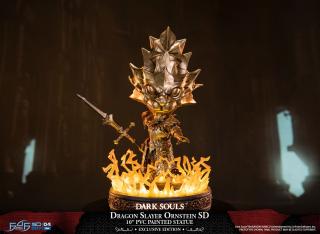 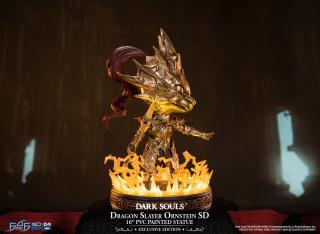 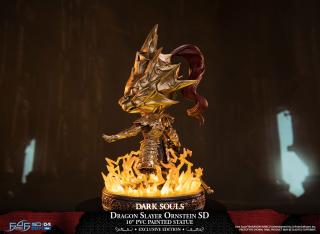 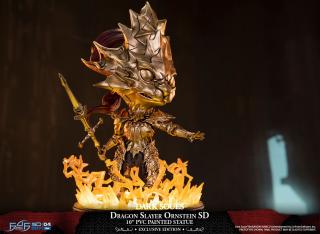 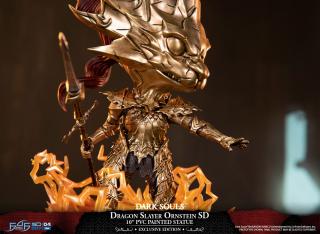 First 4 Figures is proud to introduce their latest PVC statue collectible, Dragon Slayer Ornstein SD. This is the third statue to release in the Dark Souls SD lineup.

Similar to our resin statue of Dragon Slayer Ornstein, the base replicates the pillars found in the Anor Londo Cathedral boss room. And Ornstein himself has a ton of textured details like the resin, from the intricate design of his armor and spear to the battle damage weathering found throughout the statue.

The statue's concept is inspired by one of Dragon Slayer Ornstein's moves during the boss fight. If you first defeat Executioner Smough, Ornstein ends up absorbing the strength of his fallen comrade and gains new abilities, one of which is an aerial attack. Upon landing, he releases a powerful electric shockwave, which is what we incorporated with this statue. And with the Exclusive Edition, these lightning effects have LED lights in them with two modes-static and animated-adding even more life to this piece.

You also receive First 4 Figures' beautifully designed signature Premium Deluxe Box with the Exclusive Edition. Should you wish to keep the statue in pristine condition, the Premium Deluxe Box perfectly complements its contents and serves as a display.

Don't miss out on this limited-time offer exclusively on First4Figures.com!

This is the third statue in First 4 Figures' Dark Souls SD PVC line. If you already authenticated the previous statue in the line (Solaire of Astora SD), then you are entitled to receive the same number for your Dark Souls - Dragon Slayer Ornstein SD. Otherwise, statue numbers will be assigned randomly.