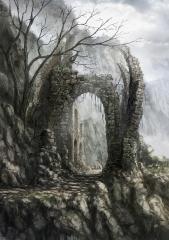 Majula, the central area of Dark Souls II, posed a lot of headaches for the game's designers. Opting for a hub-and-spoke level layout, the team knew it had to get Majula just right, as players would travel through it time and again. In interviews about the game's development, team members explained how Majula changed a lot from concept to concept, before it found its final form. The general idea was to create a desolate and small coastal village, strewn with ruins of buildings that lost their purpose ages ago. However, in the first concepts the 'small' area was twice the size it is today, with an upper and lower section, of which the latter would stretch down into the ocean. Eventually, this would be downsized considerably, to finally arrive at a place where players could easily know their way around.

Like other early concept art, the 'Majula Gate' artwork helped the art team decide on the general architectural and environmental elements for Majula, such as gothic building fragments, and rocky pathways with sparse trimmings of greenery. Later, the spectacular sky of a seaside sunset was added to illuminate the details, juxtaposing the golden sunlight with the murky browns of decaying buildings and dead grass.