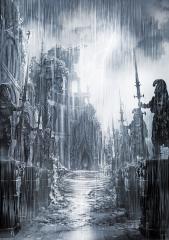 After a long journey through the world of Dark Souls II, the player reaches Drangleic Castle, an important location for the game. Once the residence of the rulers of the Kingdom of Drangleic, it was built as a remote hideout, nested among the mountains. Like all important game locations, the castle went through several iterations before the development team landed on the final design, yet one important element remained throughout: the scene had to revolve around an epic boss battle in an inner courtyard, in the rain, with crashing lightning to enhance the drama of the fight.

The 'Drangleic Castle' concept art piece shows the team's early ideas on the shape of the castle, and the weather conditions that set the mood for the eventual fight against the Mirror Knight (also known as Looking Glass Knight). The ruined castle walls are kept light, as this is clearly not a fortress, with ornaments meant to impress visitors, not ward off enemies. Bolts of lightning shoot through the skies, illuminating the statues, while the rain gushes from the walls. The castle would see a lot of versions after this concept piece, but Dark Souls II players will recognize how the team stayed true to their early vision of a remote castle with a desolate, forlorn feel.