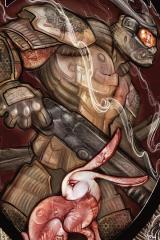 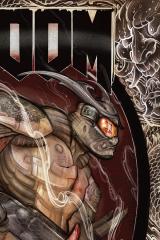 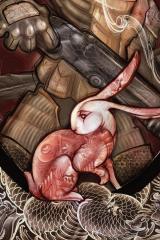 The DOOM Eternal Samurai Slayer Lithograph is a portrait of a lone warrior in a sea of fearsome creatures. Inspired by traditional Japanese woodcut prints called musha-e or “warrior pictures”, it imagines the DOOM Slayer in samurai armor with intricate geometric patterns. His helmet is a blend of its original shape and visor with elements of a samurai’s kabuto: a pair of horns that bend backward, ear-like projections emerging from the sides, and a half mask with a beastly nose and mouth. In his hand is a super shotgun adorned with the image of a mythical being. On his back, he carries a pair of swords. Though he is the subject of the artwork, the DOOM Slayer is not in the foreground of the composition. That honor belongs to Daisy, his beloved pet rabbit. The two of them are depicted to have matching koi tattoos.

Created by painter and tattoo artist David Koenig, this piece features graceful lines, intricate details, and a few carefully-chosen colors to honor the tradition that inspired it: artworks that immortalized legendary warriors and their greatest battles. The DOOM Eternal Samurai Slayer Lithograph is a limited production of only 400 individually-numbered prints.

Dave Koenig is a painter and tattooer based out of Omaha, Nebraska. He has been tattooing, both locally and internationally, since 2001. Working with a wide range of mediums from Ink and water color to large scale acrylic, and even digital, Dave maintains a controlled looseness of line work and a delicate treatment of color. Although heavily influenced by Japan’s historic culture and use of patterns, his work also reflects the imagery and antiquity of both American Traditional and Art Nouveau. You can find Dave Koenig’s work at dkoenigart.com.