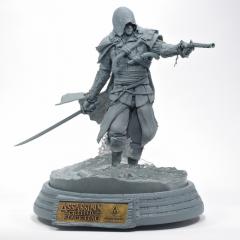 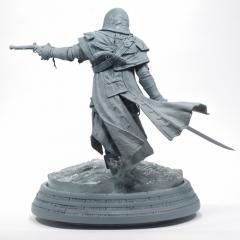 50 additional extremely-limited â€œUnpainted Artist Proofâ€ version of the resin statue: These 50 additional statues are primed in flat grey and ready for customization or to be displayed as is by collectors in its rawest form; Sequentially numbered (1-50); Quote from Todd: "We've been making toys for two decades and I can say, on a dozen of occasions, the most joy I get out of looking at our products is seeing the unpainted proofs we receive," McFarlane said. "My eyes are not distracted from the detail and nuances of the actual sculpt by the paint application. With the figure being unpainted shadows are cast on every level of the figure and really draw your eye to amazing detail and time put into these products"

Assassinâ€™s Creed IV Black Flag begins in 1715, when pirates established a lawless republic in the Caribbean and ruled the land and seas. These outlaws paralyzed navies, halted international trade and plundered vast fortunes. They threatened the power structures that ruled Europe, inspired the imaginations of millions and left a legacy that still endures.

This highly detailed, hand-painted, cold-cast resin statue depicts a young, cocky and fearsome captain named Edward Kenway. His skill with a sword and disdain for authority earn him the respect of pirate legends like Blackbeard, but thrust him into an ancient conflict that threatens to destroy everything the pirates have built.

With acute attention to detail, this statue was designed by Todd McFarlane and his award-winning McFarlane Toys design group, in conjunction with Ubisoft. Standing approximately 14 inches tall with base, this resin statue is limited to 1000 pcs worldwide, has a 360 degree turning base and includes a Certificate of Authenticity hand-signed by McFarlane Toysâ€™ creator Todd McFarlane.